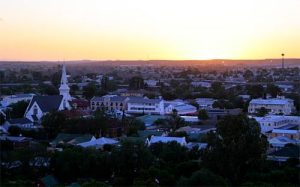 In 1818 a town was established on the farm Hooyvlakte at the request of Lord Charles Somerset, then governor at the Cape. His aim was to establish and maintain law and order in the hinterland. He arranged for it to be named in honour of his father, the fifth Duke of Beaufort. Today, a typical “platteland” town with a rich, romantic history Beaufort West welcomes visitors who wish to study its fascinating ecology and colorful history. It also offers you a glimpse into the Anglo-Boer War.

The 1740’s saw the settlement at the Cape extending rapidly in an easterly direction and the first stock farms were established in the area later to be known as the districts of Sutherland and Fraserburg. By about 1750 stock farmers had moved towards the Koup and the Nieuveld and established farms in what is now the district of Beaufort West. A few years later (1760) the loan-farm Hooyvlakte – on which the town Beaufort West was to be laid out later – was issued. The naturalist and traveler, Lichtenstein, says that when he visited this farm of Commandant Abraham de Clerk in 1804 he found that the nearest neighbour was 100 kilometers away. By1800 there were already several farmers who owned stock farms to the north of the Nuweveldberge. 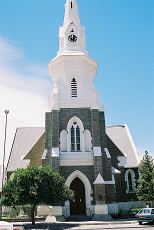 Then the government decided to appoint Fisher and Stockenstrom, magistrates of Graaff-Reinet and Tulbagh respectively, to find a suitable farm on which a town could be laid out. The beautiful Hooyvlakte was an obvious choice and it was bought, together with De Klerk’s other farm, Boesmansberg, for the sum of 13 333 riksdaalders (R2050).

The new district was proclaimed on 27 November 1818. The then governor at the Cape, Lord Charles Somerset, named the town and district ‘Beaufort’ in honour of his father, the 5th Duke of Beaufort.

There was considerable delay in the surveying of the plots since the first plots were measured out and deeds of transfer only given in 1821. Donkin, Bird and Church Streets were the first streets.

A hundred and fifty years ago, on 3 February 1837, a proclamation appeared in the Government Gazette stating that Beaufort had been granted municipal government, and thus it became the first municipality in South Africa.

To avoid confusion with Fort Beaufort and Port Beaufort, the name ‘Beaufort’ was changed to Beaufort West in the 1860’s.